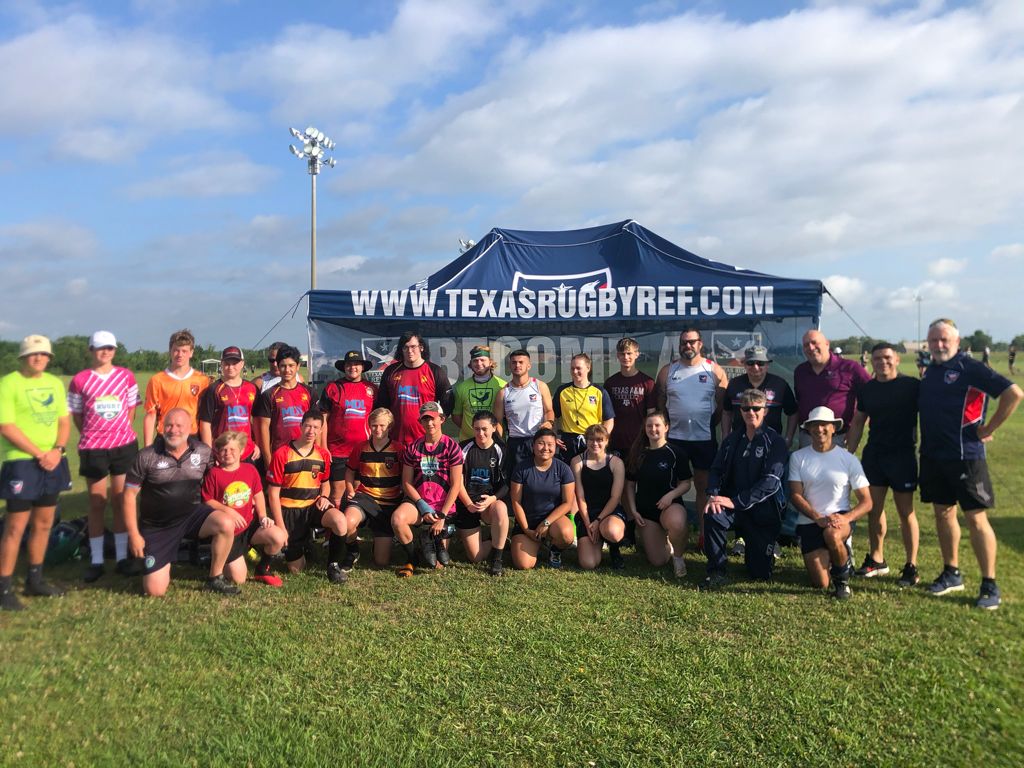 This past weekend, the Texas Rugby Referee Association was honored to supply the referee team for the Brazoria Spartans Youth Rugby Tournament held in Alvin, TX. This event was entirely officiated by U-19 referees, shining a spotlight on the young talent that USA Rugby has in the referee pool. 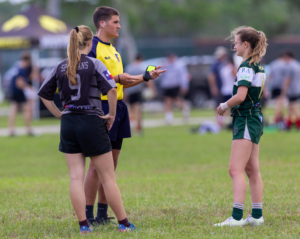 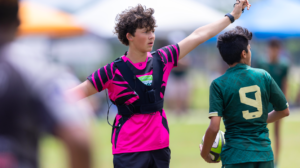 19 total youth referees descended on the suburb of Houston, TX, including six traveling cross-country on exchange from the Potomac Referee Society of the Mid-Atlantic. Ages of the youth referees ranged from 11-19, with many referees officiating players who were older than them on the day.

The tournament boasted 42 total matches – a mix of 7’s, 10’s, and 15’s – with age groups from 3/4th minis, to Middle School and High School. One of the day’s highlights included High School Boy’s Varsity sides competing in a round robin, of which 6 referees were able to officiate. 4 of the 6 had never before refereed at that level. TRRA Member Peyton Olivas (14) was one of those 4 [pictured below, left]. 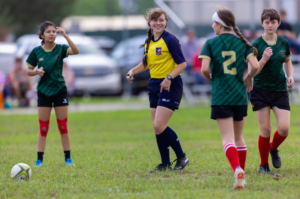 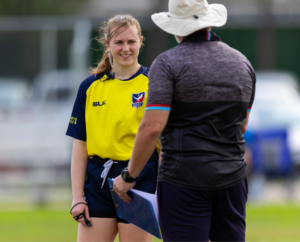 5 of the youth referees were brand new to officiating, having taken the L1 Referee Course only a week earlier in Houston. Texas Rugby Referee Association Vice-Chair Tim O’Gara was the educator for that course and the referee manager on the day. Colleagues reported, “Tim worked tirelessly to make this event happen. His passion for the number of youth referees to grow and for the kids to have the experience and support so many of us missed out on was palpable. This event was phenomenally run and officiated, and Tim was the cornerstone to making this happen”.

The youth referees were supported outstandingly by a skilled team of referee coaches, coming from all over the country and internationally to volunteer to coach the next generation. Fernando Garcia (Mexico) [pictured below, far right] and Phil Klevorick (Back10Pros) were an invaluable addition to the coaching crew. 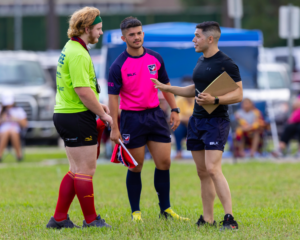 The TRRA youth referees in attendance are now all eligible for selection to an exchange to Potomac Referee Society in late July, in an effort to grow the ties between referees both within a region, and cross-country. 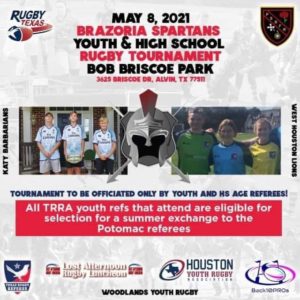 Special thanks to the organizational efforts by Ken Fraine (Potomac) and Tim O’Gara (TRRA) who put the pieces together for an amazing weekend.

The recording of the 2017 Global Law Trial Webinar is up and available here for you to view, along with the video clips from the presentation and the PDF of the power point. You will also find a video from World Rugby and High Performance Referee Manager Alain Rolland covering all the new laws in effect for competitions this fall. Enjoy..

The original trial start date would have put the adoption of these trial laws into effect in the middle of our National 7s tournaments, and rather than change laws mid-stream we have opted to bring the law changes in early and operate the entire tournament set under the new laws.

Each of the law trials, and their specific law segment are listed below:

Add to 5.7(e) If a penalty is kicked into touch after time has elapsed without touching another player, the referee allows the throw-in to be taken and play continues until the next time the ball becomes dead.

Add to 8.1(a) When there are multiple penalty infringements by the same team, the referee may allow the captain of the non-offending team to choose the most advantageous of the penalty marks.

Penalty Try. If a player would probably have scored a try but for foul play by an opponent, a penalty try is awarded. No conversion is attempted.

• A player who is attempting to bring the ball under control is deemed to be in possession of the ball.

If the ball-carrier reaches the plane of touch but returns the ball to the playing area without first landing in touch, play continues.

Law 13 Kick off and Restarts

The restart kick must be taken within 30 seconds of a penalty kick or dropped goal being attempted where the kick is successful or goes dead. FK

Teams must form a lineout within 15 seconds from the time the referee indicates the place where the throw-in will take place. FK

Teams must be ready to form a scrum within 15 seconds from the time the referee indicates the mark of the scrum. FK

A penalty or free-kick must be taken within 30 seconds of being awarded. 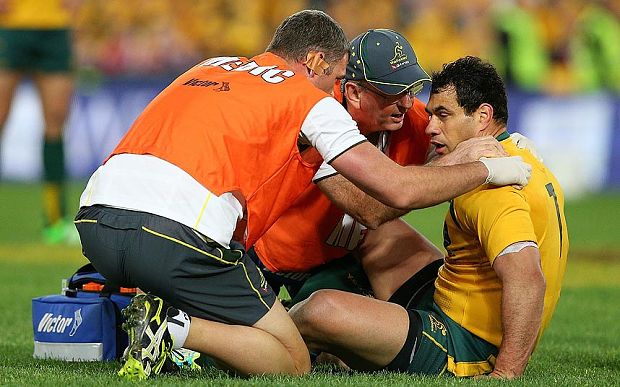 A quick reminder, the Head Injury Assessment (HIA) is NOT an option for rugby athletes competing in any domestic competition in the United States.

We have been asked many times if this is Dangerous Play. This is not specified in Law 10.4, and the question cannot be answered with a simple yes or no because there are so many possible variations on the situation.

The short answer is that sometimes it is dangerous and other times it is not, depending on the circumstances. Each play must be judged on its own merit by the referee. Here are some factors to consider when viewing this sort of play:

Below are some key focus areas for match officials:

NOTE: If time expires and a team is awarded a PK, they may kick to touch to end the game, but they do not get to take the lineout. That was a trial Law approved by World Rugby for PRO Rugby and Super Rugby only.

If you have any questions or need clarifications please feel free to contact me.

Please review the second clarification from World Rugby this year. It addresses some specifics regarding the new section of Law 3.14 (Substituted Players Rejoining a Match – injured as a result of foul play). The clarification is very straightforward, but please write to me if you have any questions.

World Rugby is trialing a variation regarding substitutions in sevens. The USA Rugby Committee has approved the use of this Variation in all domestic competitions effective June 18, 2016.

The exact wording is copied below, but in essence it allows a player to return to the game after having been substituted off. The team is still restricted to a total of five substitutions during the game. [This includes any extra time – there are no additional substitutes permitted during additional playing time.]

The Exception that allows a replacement for a player with a blood injury remains, even after a team has made all five of its allowed substitutions.

The Law that allows a temporary replacement for head injury assessment (which is referenced in this Variation) IS NOT APPROVED FOR DOMESTIC USE.

If a player is substituted, that player may return to play in that match under the following circumstances:

It has been a great year so far. 15s only has 2 weeks left and then we move into 7s season. Please let Wendy know if you are interested in participating in any of the upcoming 7s tournaments throughout the state.

With out further ado, the following announcement will be posted on our social media outlets asap:

The Referee Advancement and Training Organization (RATO) of the Texas Rugby Referee Association is honored to announce the following promotions effective immediately:

Please congratulate these outstanding referees for their superior performance and dedication to striving for the next level. Our sincere thanks to every referee in the association. . Without you, the matches do not happen. More promotions coming in the near future.